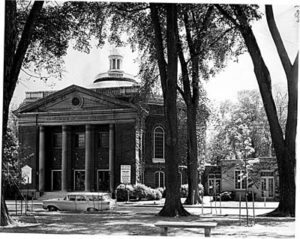 The first Christian Science meetings in Syracuse, New York, were held in 1887 and 1888 in the home of Mr. and Mrs. Edward P. Bates, who opened their home for this purpose as an expression of gratitude for a healing experienced by Mrs. Bates while reading "Science and Health, with Key to the Scriptures," by Mary Baker Eddy.  The outgrowth of these meetings was the organization of a church.

This "Church of Christ, Scientist," consisting of twelve charter members, held its first service in Greyhound hall on May 12, 1889.  In September of the same year, the Christian Science Dispensary Association, later known as The Dispensary and Reading Room was organized.

In 1891 the church rented the residence at 704 East Fayette Street to be used for all church purposes including the Reading Room.  The property was purchased in 1898 and was later remodeled providing a new auditorium seating 350 to 400 people.  the corner stone of the present church edifice, 728 East Genesee Street (formally East Jefferson Street), was laid in 1921, and the building was completed in 1923.  It has a seating capacity of approximately 1000 and was erected at a cost of $250,000 including the organ and equipment.  On December 29, 1935, the church was dedicated.

The Sunday School so far outgrew the rooms provided for it that in 1949 a Sunday School building, modern in its appointments and with nursery facilities was erected adjoining the Church edifice.

In the mid-1980's the membership voted to restore the building to its original beauty.  The restoration included the installation of a new copper roof, painting the auditorium, repairing and replacing the auditorium windows with original color panes, and repairing the organ.  Electricity was also upgraded during this period.

FOR A MORE IN-DEPTH HISTORY OF OUR CHURCH, CLICK HERE
"An Outline History of the First Church of Christ, Scientist, Syracuse,New York 1885-2018"